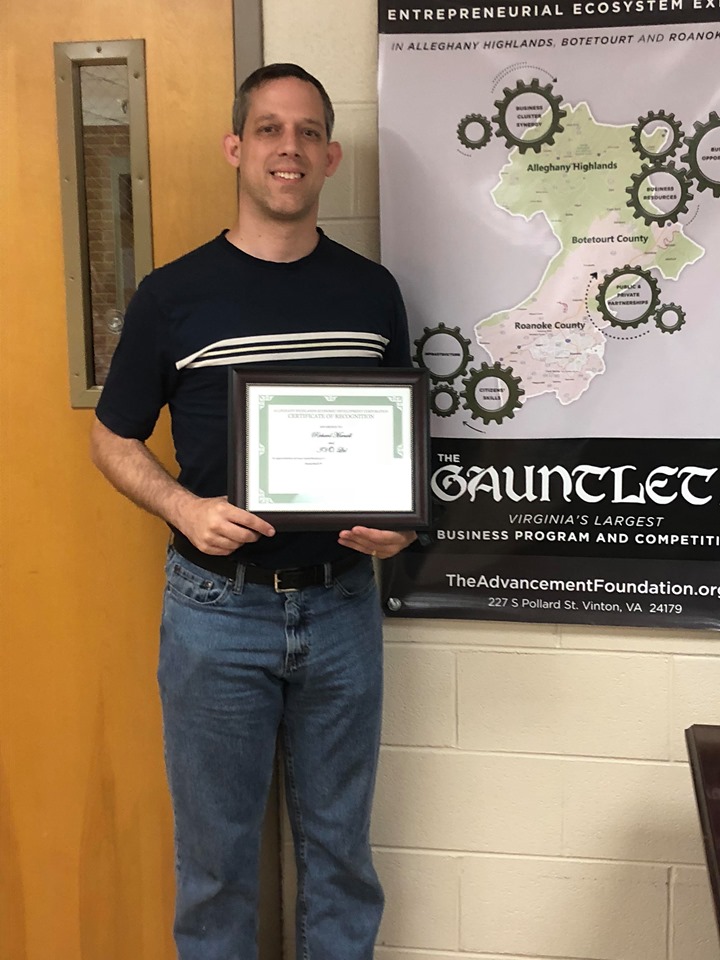 This is the sixteenth in the series of interviews conducted by the Alleghany Highlands Economic Development Corporation about small business entrepreneurship in our area.

We are located on the Dabney S. Lancaster Community College campus and can be reached at 540.862.0936 or marla@ahedc.com or terri@ahedc.com.

I recently sat down with Richard Mansell of IVO, Ltd to get his view on the life of being a small business entrepreneur in the Alleghany Highlands.

Richard Mansell can be reached by calling 704.524.7039 or preferably by email at Richard.mansell@ivoltd.com.

Richard was a pastor in North Carolina and moved here in 2011 to become the assistant pastor at Calvary Baptist Church, which is located on Will Street in Covington, Virginia.

He does electronic hardware, research and development at his workshop at home for several companies across the states on a free lance independent contractor.

He is presently moving into the Edgemont School/Drone Zone.

What ignited the spark in you to develop IVO, Ltd?

It was the particular technology innovation of wireless power.  The first part of 2018, two friends and associates of mine since 2014 Dan Telehey and Matt Silbernagel , were discussing electronic hardware for a medical device.

I started figuring out the wireless power side, so we were talking about the power supply for the medical device, I suggested that one option could be wireless power instead of a battery, USB or plug-in.

The next day they called me back wanting to talk more about the wireless power.

Since that time the actual medical device we were looking at developing actually was pushed aside completely.

We have not touched it since then and have decided to form the company IVO, Ltd continuing a technology innovation company but specifically pursuing the wireless power.

So up to that point I had been concentrating on developing products for other companies.  We decided that we would begin developing our own technology and have pursued patents to protect our developments related to the goal of wireless power.

Since then, the electronic hardware has continued to pay the bills while figuring out how IVO should move forward with a bit of continued research for wireless power.

Tell us the reasoning behind putting the medical device aside to strictly focus on wireless power.

Because of the potential technological revolution to wirelessly power things so you do not need to plug things in anymore, we felt that this is something that must be pursued.

Being the number two winner of The Gauntlet from the Alleghany Highlands, describe your experience with that program.

For number one, The Gauntlet taught me things about business that I did not know I needed to know.  That was one of the key benefits.

I wasn’t sure if I should spend the time with The Gauntlet because Dan and Matt are more the business side of IVO.  They do the office work, consider financial projections and I am the inventor, I am the technology side and CEO.

I said, “Well if the Alleghany Highlands Economic Development Corporation team is suggesting I need to be part of The Gauntlet, then I should probably do it.”

Once I was in the class, I was given all this information within a book, a playbook (how to do a business plan), and all kinds of other materials.

Then we started having the special speakers and I started learning about stuff and realized it was not as simple as having a great idea for a product and then have folks who would want to buy it.

It just magically happens, was not really the case.  Business is not magic!

So yes, learning the stuff that I did not know I needed to know about business was really good.

The second was I really enjoyed the entrepreneurial showcases, which was hearing from people who have successfully been a part of their own entrepreneurial experience.  The entrepreneurs sharing their stories brought more of the academic teaching aspects to life.

So while various individuals gave their time to teach market analysis, sales pitch, etc, which is all nice, the entrepreneurial showcases was like those things in real life.

You then start to put things together and realize this is how it goes from paper to actual business experience which was really beneficial.

The third was getting to know other entrepreneurs.

I loved that; I am a people person, an extrovert for the most part.

Then you find other people who are trying to start their own business and figuring out how can I be a help to them, how can we support each other.

Now I have lots of friends and contacts in the entrepreneurial world.

Not only that but also exposure to economic development, the chamber, city and county folks, neighboring counties because it was them coming to us, the participants of the program, not us reaching out to them.

So you have already moved in to the Drone Zone, what are your plans moving forward with hiring?

With the move, I know have space to have other people and the space to take on other projects.

As of last week, I hired a part-time administrative assistant to get the office in order.

Also last week, a student summer intern started and will be learning my electronics, 3 D printing, and wireless power.

His family has signed an NDA and waiver for him to be a part of IVO.

I am really excited about this because it is like a precursor to the fall where Ed Ozols, Technology Supervisor from Bath County High School will have his classes come down as well as Joe Mayes and his class from Alleghany High School.

Once a month we will have classes from the area schools visit IVO, with the Edgemont Building providing the space.  The Edgemont Building, formerly a school, is the central location for remote operations, maintenance and administration for the drone zone.

After the summer intern leaves, my goal will be to actually replace him with a technical assistant paid employee at some point.

What would you say are the top three skills needed to be a successful entrepreneur?

The obvious one is being a self starter and pushing ahead on your own without supervision.

You have to have that personal drive.

The second is the willingness to learn, a teachable spirit is very important.

I wonder if this makes the difference between those entrepreneurs who are successful and those who aren’t.

And/or those who are eventually successful; I think some entrepreneurs are successful because they had enough drive to get through all the hard knocks when they didn’t listen to advice.

They were eventually successful but I wonder how many heartaches would have been saved if they had a teachable spirit from the beginning.

The third would be creativity; I think you have to be creative and figure out what your niche is going to be.

As an entrepreneur you are not coming in and manning an established company to make sure it runs smoothly, you actually have to come up with what is the product and who are the people.

One of the words that came up frequently in The Gauntlet was pivot; well that is creativity, being able to come up with the ideas and establish them.

It is a saturated market, what could be my niche, discovering and figuring that out, is another aspect where creativity comes into play.

To what do you most attribute your success so far?

The Lord Jesus Christ; his help and guidance from the very beginning of biblical foundation was how to do things right.

The Bible talks about how God does everything in order and that is fundamental for study, for work, relationships with other people, so the Bible is definitely the foundation in what I have been taught by other Christians.

I think people seem to like me but it is not because of whom I was as much as whom Jesus Christ has helped me to become.

Where do you see yourself in 10 years?

10 years is quite awhile, I have thought about the near term like 3 years or 5 years but not 10.

I would like for IVO, Ltd to be running on its own with staff.  I would still be a part of the creative and inventive part.

I am concerned that the business will be so consumed with time that I will not want to do my number one thing and that is pastor and be a spiritual help to people around us.

My wife and I continue to look forward to a time where our future plans will always entail ministry.

My desire in 10 years is that IVO, Ltd is doing very well with its licensing agreements and one aspect of the business has a manufacturing facility producing products.

10 years from now I want to be pushing the limits of technology innovation because I have ideas.

As that expands it opens up new technology possibilities.

In one word characterize your life as an entrepreneur?

If you could talk to one person from history who would it be and why?

The reason is not only was he an inventor but he was such an observer of the natural world, he learned from that and how to apply it to technology.

The other thing is he had certain frustrations and he had to overcome and deal with it and I could learn so much from him concerning that.

Think about it, he was a guy from Austria during World War I and World War II trying to develop technology in the United States.

He was also bringing into existence technology that went directly into the face of existing technology.

DC current was the thing for electricity and he was bringing in AC current.  Later on he wanted to bring in pulse DC current but AC current had already been established by him.

He had to change things and because of it in his later years he was relegated to the aspects of pseudo science, kind of a mockery.

Also it seemed like he had Aspergers or something similar.  He had some obsessive compulsive disorder in him as well, the way he would always have to place his napkins/forks, so there are things in history we see about him.

There are some characteristics as such that I would love to ask especially in light of what we understand concerning those things today.

Another thing about Nikola in comparison to me, we both think through technology in our heads first so by the time we put it down on paper we are pretty sure it is going to work already.

Sometimes thinking through it is enough for me and I can finally sleep.

I am through asking questions unless there is something you would like to add.

The only thing I would want to add is if anyone is considering; would the time spent in Gauntlet be worth it, I would say yes, do it!

Entrepreneurs are busy and sometimes they do not know what they need to do and it’s like, do I spend the time and the money to be part of the Gauntlet?

Go to The Gauntlet every Tuesday night, do it!